STD or Sexually Transmitted Disease can be transmitted to an unaffected individual upon sexual contact with another individual afflicted with a certain STD. These venereal diseases are caused by several bacteria and viruses in both men and women. Certain STDs are curable whereas others are not. STDs cause severe health problems. We list below some of the most common types of STDs in men and discuss their signs and symptoms. 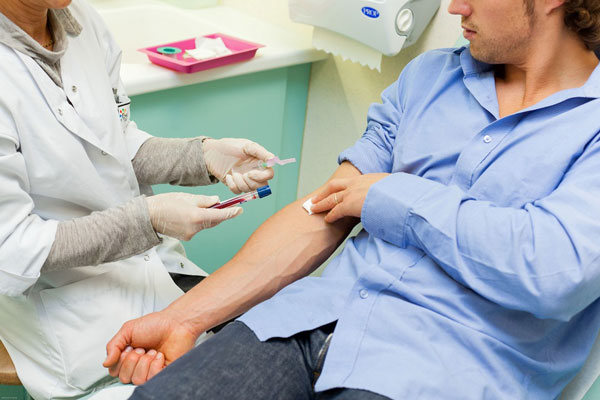 AIDS is an acronym for Acquired Immuno Deficiency Syndrome. This syndrome is encountered in the most advanced stages of infection by Human Immunodeficiency Virus (HIV). This virus is known to kill and damage most of the cells that strengthen our immune system. The said virus can be transmitted by unprotected sex, sharing of needles with the infected person or coming in contact with the blood of the infected person.

The symptoms of HIV/AIDS appear very late. These signs may include swollen glands and other flu like symptoms. Upon performing a blood test, one can know whether an individual is suffering from HIV/AIDS. Though there is no cure, a person with HIV/AIDS can live with the help of many medicines that help fight the infection. Having a singular sexual partner and engaging in protected sex would hugely minimize the chances of encountering this infection.

This is one of the most common STD in the United States. It is caused by bacteria. This disease is transmitted by sexual intercourse with an infected person. There are generally no symptoms as such seen in this disease. However, one can notice genital itching, dull pelvic pain, cervical inflammation, abnormal discharge from the penis (in case of men) or vagina (in case of women). Chlamydia majorly affects the urinary tract in both men and women. If left untreated in women, this STD can lead to pelvic inflammatory disease that might cause serious problems with pregnancy and may also make you infertile.

In case of men, this STD can infect the tube that carries the sperm, known as epididymis, which can cause infertility and pain. Chlamydia can be cured with the help of antibiotics. The major prevention of Chlamydia is to engage in protected sex.

It is one of the most common STD in young adults. This STD is caused by bacteria that can infect the genital tract, anus or mouth. In women, symptoms associated with gonorrhea are not distinguishable. However, in men suffering from this STD, symptoms like pain when urinating or discharging from penis persists. If gonorrhea is left untreated in men, it can lead to epididymitis, in which the testicles are affected leading to infertility.

Gonorrhea can be passed by a mother to the baby during pregnancy. Gonorrhea can be treated with the help of antibiotics. Use of latex condoms and performing protected sex can greatly reduce the transmission of this STD.

Another STD caused by bacteria, syphilis infects the lips, mouth, genital area, and anus in both men and women. This STD is transmitted by sexual intercourse with the infected person.

In the early stages of this STD, one can observe a single painless sore that is very small. One can also observe swelling near the lymph nodes. If syphilis is left untreated, one might develop itchy rashes on the hands and feet. Moreover, this can lead to birth defects in the baby and also the death of the infant.

Syphilis is easy to cure in the earlier stages with the help of antibiotics. Using latex condoms, maintaining single sex partner and performing safe sex would ensure that you are not infected with this disease.

This STD is caused by Hepatitis B virus. Although not thoroughly considered as STD, this virus is transmitted via sexual contact with the infected person. The symptoms of this disease are loss of appetite, difference in the sense of smell and taste, sore muscles, diarrhea, nausea, jaundice and fatigue. The prevention against this disease can be obtained by taking the Hepatitis B vaccine.

Unlike bacteria induced STDs, Herpes is caused by a virus known as Herpes Simplex. There are three types of herpes viruses. The oral herpes is known to cause cold sores around the lips and mouth. The genital herpes is known to cause sores on genitals, butts and anus. Having oral sex with an infected person also puts you in a higher risk of contracting this STD. Taking an antibiotic can reduce the number of sores and painful blisters.

Warts on the genital area are caused by an infection from Human Papilloma Virus (HPV). In men, the warts are seen on the tip of the penis. These warts are also observed around the anus. Smaller warts can be removed by applying liquid nitrogen or a weak acid. Removal of larger warts might need surgery.

This sounds more of an infestation than a disease in itself. In pediculosis, the pubic hair is infested by grayish white lice that cause crabs. The eggs of these lice can be seen attached to the tip of the pubic hair. The major symptom of this STD is constant itching in the pubic region. The lice eggs can be transmitted through sexual intercourse with an infected person.

Scabies is caused by a mite known as Sarcoptes scabei. These mites infest the armpits, buttocks, breasts, genital areas, fingers, toes and many more places. Red bumps that appear might be treated as a symptom.

This STD is a common viral infection that causes the formation of small papules (lesions) that are filled with white fluid which is very contagious. These lesions generally appear on the skin and can be transmitted during close sexual contact.

This STD is caused by Trichomonas vaginalis. It is transmitted through sexual intercourse and can infect male and female urethra. The symptoms like painful urination, thin and whitish discharge from the penis, can be observed.

Chancroid is a rarely heard STD caused by Haemophilus ducreyi. The symptoms include genital ulcers, tender groin lymph nodes, painful urination, painful open genital sores and many more. These sores can lead to permanent scarring of the skin. One can treat this disease with the help of antibiotics like Azithromycin, Erythromycin and so on.

This STD can be transmitted via sexual intercourse with an infected person. The symptoms include granulomas, penis nodules, foul smelling discharge from the penis, narrowing of anus, oozing and red-skinned lesions, bleeding genital ulcers and many more. This STD can also lead to cancer. This STD can be treated with the help of antibiotics.

The non-specific type of urethritis is very much different from Gonorrhea and Chlamydia. The symptoms include urinary pain, urethral pain, urinary discharge, inflammation of the urethra, pain after urination, stained underwear, frequent urination, and many more. This STD can cause pain in the testes, epididymitis, fever, arthritis, infertility, and much more. Antibiotics like tetracycline, erythromycin, and so on can cure non-specific urethritis.

Every man should look into this list of STDs before making the mistake of indulging in unprotected sex.