Every human being needs rest physically and mentally at regular intervals; consequently, sleep has become an important part of our lives. The waking hours are filled with activities which create imbalance in the body. This imbalance is restored to normalcy during sleep. 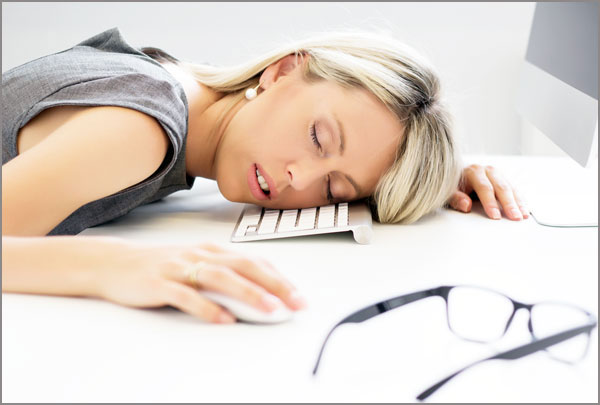 The chronic sleep disorder characterized by the urge to sleep excessively and at strange times is called narcolepsy. A person with this sleep disorder will go into the REM (rapid eye movement) stage of sleep within a fraction of the time that others normally would.

People suffering from narcolepsy sleep disorder often have disjointed sleep during night, along with frequent awakening periods that last for a short time. Due to insufficient sleep, the balance is not restored to the body; which results in its demand for sleep. This leads to patients spontaneously falling asleep during day time, at inappropriate times and places.

The most prominent symptom of narcolepsy is the onset of sudden uncontrollable drowsiness, as well as attacks of sleep, at unexpected and irregular intervals. The signs to look out for are as following:

People are known to continue working during the sleep attack, which is not dangerous when the task is of writing or typing, but can be fatal during driving or any other work which requires full concentration.

Normally, the symptoms of narcolepsy begin to appear between 10-25 years of age, but, it is not impossible for it to begin in fifties in rare conditions.

Why narcolepsy should not be ignored

Certain psychosocial problems, educational and cognitive difficulties have been associated with or may result from narcolepsy which is most typically seen to occur during the teenage years.

The teen years are crucial with regard to development of self esteem and self image, and making a career choice for life, and the sort of disruption caused by a disorder such as narcolepsy at this stage of life can be very significant.

The underlying cause of narcolepsy is important to know and understand because the symptoms of this sleep disorder may result in poor academic progress, absenteeism from school and learning difficulties and hence other issues relating to self image and other psychological problems.

Though the exact causes of narcolepsy are not understood fully, research has shown the conditions and risk factors that place one at greater risk of developing this sleep disorder. A correct diagnosis of narcolepsy is also important to make because it can often be confused with other sleep disorders.

Certain chromosomal and genetic features are known to put a person at greater risk of narcolepsy. Being male is one of the risk factors since narcolepsy is seen more often in men than in women. Certain races are seen to have greater incidence of this sleep disorder than others.

Certain occupations may also be among the causes of narcolepsy. For instance, one Harvard study showed that being a police officer was a risk factor for narcolepsy as well as other sleep disorders.

The causes of narcolepsy can include genetic, environmental and biological factors. Narcolepsy is a neurological sleep disorder occurring throughout the world in every racial and ethnic group. Scientists have discovered a genetic link between the people suffering from narcolepsy, involving the Chromosome 6, also known HLA complex.

Deficiency of the proteins hypocetin and orexin; that are responsible for control of appetite and sleep is common among narcoleptics.

Deficiency of hypocretin: Hypocretin (or orexin) is a brain chemical known to be responsible for arousal and regulation of sleep. A lack of this chemical is often detected in people who have narcolepsy.

In a rat study it was even seen that the transplantation of hypocretin neurons into the brain is possible and in future could actually help to alleviate the symptoms of narcolepsy.

Other causes of narcolepsy: Some experts believe that narcolepsy is an autoimmune disorder that involves the body’s immune cells.

Certain environmental exposures that children may be subject to before time, could also cause narcolepsy among those who are genetically predisposed to it, believe other experts.

Though difficult, narcolepsy is a treatable condition. A multimodal approach including medications, developing regular night time sleep pattern, organized and scheduled short naps during that day, all combined with healthy lifestyle can bring forth favorable outcome.

Individuals suffering from mild narcolepsy may not require medications, but it is a necessity for those having severe symptoms. Though there is no specialized medicine for treating narcolepsy directly, the major symptoms of sleepiness and cataplexy are targeted through the drugs.

Excessive day time sleepiness can be overcome by stimulants whereas the antidepressants can help in reducing cataplexy symptoms.

It is recommended for the patients to avoid alcohol, heavy meals as well as beverages that can interfere with sleep during the treatment. Also over-the-counter drugs, such as medications for allergy and cold, which can cause drowsiness, should be avoided, or when needed, taken under strict medical supervision.

Those having other health problems, such as high blood pressure, diabetes or cardiac problems, should consult their general physician before taking medications for narcolepsy treatment, since interaction between medicines can have harmful effects on health of the patient.