At times, we find blood oozing from the nose due to the reason that one of the many veins in the nose has broken or busted. This act of nose bleeding is rare and many people fear it because of this fact. Technically it is referred to as nasal hemorrhage and is broadly divided into anterior and posterior bleeding. Posterior is the least common form of bleeding implying that anterior is the more common. Both types can lead to death in most serious of cases, though deaths resulting from nosebleed are very uncommon.

The surest way of knowing whether you have a nosebleed is by seeing the blood come out of the nose. If you are sleeping on your back, then you will feel some liquid in the throat. Shortness of breath and irregular heartbeat, accompanied by the body turning pale are among the other signs. 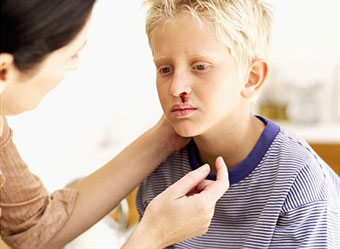 It can be either due to local factors or due to systematic factors.

Local factors: Following can be the local factors leading to nasal bleeding:

Systematic factors: Hypertension and common cold are 2 major systematic factors for bleeding of the nose. Apart from these, over alcohol usage, rhinitis and use of blood thinning medications can be other reasons.

How to Stop It?