As types of fungus, mushrooms are typically found to grow on rotting material, dung and so on. Dark brown mushrooms with a yellow stem called Blue Bell or Bottle Cap, may be found on or beside mulch, peat or rotting wood. The small light yellow or brown mushroom called Liberty Cap, grows in damp grassy areas known to be frequented by cattle and where cattle droppings may be found. Mexican mushrooms or Golden Caps are seen to grow on dung. They bruise easily are fairly large in size. 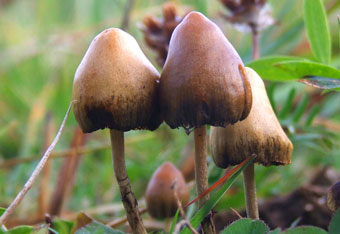 Though the effects different types of magic mushrooms have can vary significantly, it is thought that a one to two gram dose is considered standard. A dose of up to 8 grams of certain types may be considered an overdose. They can be consumed in the form of shakes, smoothies, powdered forms or in extract form.

According to some experts, magic mushrooms could work on the body in a way similar to LSD and could produce a similar ‘trip’. Studies have shown that people could have mystical or transcendental experiences as a result of consuming these.

People consuming them reported to feeling peaceful and joyful; but were also seen to display dangerous or risky behavior. They are thought to have a potential for abuse and for this reason, they are illegal or a controlled substance in many countries.

Magic mushrooms are also used for medicinal purposes. Many people have reported improvement in the symptoms of cluster headaches with the help of magic mushrooms.

They are also thought to help people with problems such as obsessive compulsive disorders (OCD) and depression. Studies have shown them to be more effective than pharmaceutical approaches for people with OCD, managing to send them into remission, without the side effects of other medications. When used in a proper, controlled manner, magic mushrooms are also seen to significantly benefit those with depression.

Researchers have observed that people have experienced personality alternations; even personality improvements as a result of ingesting magic mushrooms. This sustained impact on people’s personalities, has been referred to as an “anti aging effect on the personality”.