CSIR or Council of Scientific and Industrial Research has unveiled herbal tablets named BGR-34 for fighting diabetes. BGR34 pills named after the abbreviation for Blood Glucose Regulator, were developed by two of the CSIR labs funded by the Indian Government. This Ayurvedic medicine for diabetes is manufactured by a New Delhi based pharmaceutical company, Aimil Pharmaceuticals (I) Limited. 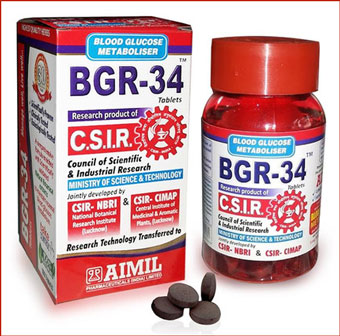 Though there are several other herbal drugs for diabetes, what sets apart BGR34 is the fact that it is scientifically validated and backed by CSIR. National Botanical Research Institute (NBRI), and Central Institute for Medicinal and Aromatic Plant (CIMAP) are the two laboratories of CSIR that are credited for developing this wonder drug for Type 2 Diabetes.

What Is Type 2 Diabetes?

This is the most prevalent/common form of diabetes. In other words, most of the diabetic patients (about 90%) suffer from Type 2 diabetes. In U.S. alone, there are over 27 million patients of Type 2 Diabetes. In type 2 diabetes, you develop insulin resistance, meaning that your body is unable to use the insulin produced in your body effectively. Initially, your pancreas makes additional insulin to compensate for it. But, as time passes, it is unable to make enough insulin to maintain the normal levels of blood glucose. So, technically speaking, type 2 diabetes is characterized by relative lack of insulin as compared to type 1 diabetes which happens from absolute lack of insulin.

According to NBRI scientists, this alternative medicine for diabetes has several functionalities. It strengthens your immune system and reduces complications caused from persistently high blood glucose levels. It also checks for free radicals, and thus, acts as antioxidant.

BGR 34 tablets have been scientifically tested and proven to provide the following benefits:

So, what does this wonder diabetes drug contain? The Ayurvedic medicine is based on the text of Ancient Ayurveda. It is made from medicinal plant extracts, the main ingredient being the leaves of Gymnema sylvestre plant, commonly known as Gudmar or Madhunashini in Hindi. Given below are the aqueous and powder extracts from which BGR34 is made:

Like all other medicines, BGR-34 helps you manage diabetes but does not treat it. So, you need to take it regularly to keep your blood glucose level in control. You should continue to follow your diet control and exercise regime.

What Are the Side Effects of BGR34?

The Ayurvedic drug is approved by the Department of Ayurveda, Yoga and Naturopathy, Unani, Siddha and Homoeopathy (AYUSH), Government of India. The drug has been tested on animals and is found to be effective in 67 percent of cases. Additionally, it has also been tested on a group of 1000 patients from different states of India. The study spread over a period of 18 months found that the medicine brought down the blood glucose levels to normal within 3-4 days in 67 percent of patients.

According to CSIR official, BGR34 does not have any side effect or toxicity. It works by controlling sugar level in the blood stream and inhibiting the harmful effects of other medicines.

Commercial production of BGR34 has already started and the diabetes tablets are already available in the market. You can buy them from offline as well as online medical stores. They are available in a pack of 100 tablets priced at Rs. 500 (roughly about $10). Thus the price of one BGR-34 tablet comes to 5 INR or about 0.1 USD.

YOU CAN BUY IT ON AMAZON HERE